Early this September, the World Economic Forum on ASEAN 2018 with the theme: “ASEAN 4.0: Entrepreneurship and the Fourth Industrial Revolution” has been held in Hanoi, Vietnam, on September 11 – 13, 2018. Among country member, Vietnam stood out as one of the stars of the emerging markets universe. Economic growth, market openness, opportunities for investments has been the success of this country in preparation for the Era of IR 4.0.

Just 30 years ago, Vietnam’s economy was one of the poorest in the world, and growth in this centrally planned economy was rather dim – per capita GDP was stuck between $200 and $300. But then, in 1986, the government introduced “Đổi Mới”, a series of economic and political reforms, and steered the country to becoming a “socialist-oriented market economy”.

Today, Vietnam is one of the bright stars of the emerging economies. Its economic growth of 6-7% rivals China, and it exports are worth as much as the total value of its GDP. Anything from Nike sportswear to Samsung smartphones are manufactured in this ASEAN nation.

So how did this growth miracle happen? According to analysts from the World Bank and the think tank Brookings, Vietnam’s economic rise can be explained by three main factors: “First, it has embraced trade liberalization with gusto. Second, it has complemented external liberalization with domestic reforms through deregulation and lowering the cost of doing business. Finally, Vietnam has invested heavily in human and physical capital, predominantly through public investments.”

Regarding the first factor, the analysts point to the various free trade agreements Vietnam has signed in the last 20 years. In 1995, Viet Nam joined the ASEAN free trade area. In 2000, it signed a free trade agreement with the US, and in 2007 it joined the World Trade Organisation. Since then, further ASEAN agreements followed with China, India, Japan and Korea, and just this year, the amended Trans-Pacific Partnership went into effect – albeit without the US. The cumulative effect of all these agreements was to gradually lower the tariffs imposed on both imports and exports to and from Viet Nam.

The government’s drive towards an open economy also included domestic reforms. In 1986 the country created its first Law on Foreign Investment, enabling foreign companies to enter Viet Nam. Since then, law firm Baker & McKenzie said in a 2016 report, the law has been revised a number of times, mainly to adopt a more pro-investor approach while aiming to reduce administrative bureaucracy and better facilitate foreign investment into Vietnam.

Viet Nam’s efforts did not go unnoticed in international rankings. In the World Economic Forum’s Global Competitiveness Report, Vietnam rose from 77th place in 2006 to 55th in 2017. In the World Bank’s Ease of Doing Business rankings, meanwhile, Viet Nam rose from 104th place in 2007 to 68th place in 2017. Last year, the Bank said, Viet Nam made progress on everything from enforcing contracts, increasing access to credit and electricity, paying taxes and trading across borders.

Finally, Viet Nam invested a lot in its human capital and infrastructure. Facing a rapidly growing population – it stands at 95 million today, half of whom are under 35, and up from 60 million in 1986 – Vietnam made large public investments in primary education. This was necessary, as a growing population also means a growing need for jobs. But Vietnam also invested heavily in infrastructure, ensuring cheap mass access to the internet. The Fourth Industrial Revolution is knocking on Southeast Asia’s door, and having a sound IT infrastructure in place is essential preparation.

Those investments paid off. Armed with the necessary infrastructure and with market-friendly policies in place, Vietnam became a hub for foreign investment and manufacturing in Southeast Asia. Japanese and Korean electronics companies like Samsung, LG, Olympus and Pioneer and countless European and American apparel makers set up shop in the country. By 2017, the Financial Times reported, Viet Nam was the largest exporter of clothing in the region and the second largest exporter of electronics (after Singapore).

Economic growth followed suit. Since 2010, Vietnam’s GDP growth has been at least 5% per year, and in 2017 it peaked at 6.8%. With such rapid economic growth, the country grew from one of the poorest countries in the world to a comfortably middle-income one. Whereas its GDP per capita was barely $230 in 1985, it was more than ten times that in 2017 ($2,343). Corrected for purchasing power, it stands even higher, at over $6,000. In the trend of economic growth, tourism has been identified as a leading sector that drive Vietnam’s economy. Compared to its contribution of 1.76 percent in GDP in 1994, 2017 has witnessed a raise to 6% contribution from tourism to the nation’s GDP. Total international arrivals in 9 months of 2018 reached 11,616,490 arrivals, increase 22.9% over the same period last year.

“The tourism industry has attracted lots of investment for developing products, services and facilities, which has changed the appearance of tourism destinations and led to an increasing number of modern, high-quality hotels and services.” said Ngo Hoai Chung, vice chairman of the Vietnam National Administration of Tourism.

According to Do Thi Hong Xoan, chairwoman of the Viet Nam Hospitality Association, the kinds of accommodation are becoming increasingly diverse. Besides hotels and motels, they now include many others such as resorts, tourist apartments and villas. Some 45 percent of them are situated in the north, 29 per cent in the central and Central Highland regions and 25 per cent in the south.

For such a promising future of Vietnam’s tourism, Eviva strongly believe that our cooperation will make a miracle for your company and ours, and the development of Vietnam’s economy in general.

Let’s discover more about the fascinating destinations of Vietnam and Indochina!

Vietnam – The country of authenticity 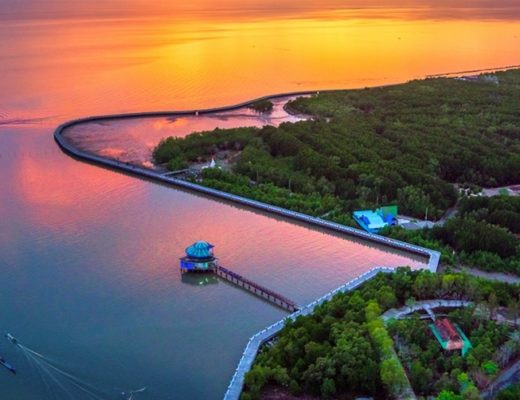 Vietnam Photography: A stunning view from above