Cốm is a unique specialty of Hanoi. Hanoian appreciate this gift of Autumn as much as they call it a distinctive feature of the thousand-year-old capital. To make Cốm, there is a complicated process that Vietnamese farmers have cleverly invented and developed for hundreds years. Among all Cốm production villages, Vong village has been considered to have the most tastiest Cốm.

Cốm is a type of rice flake which could easily be recognised by its green colour. Cốm only appears in Autumn. Its green colour is natural since people only harvested green glutinous rice grains when they have not yet been mature. The word “Cốm” pronounced “kohm” with an upward interrogative tone can be easily misunderstood with “Cơm” which means the common rice. There are three types of “Cốm”, which is distinguished by the time it harvested. “Cốm” made at the beginning of Autumn is usually thin and softer, therefore it is best to eat it directly or with banana. Mid-season “Cốm” is perfect to mix with ground pork to make the special Vietnamese fried pork sausage; while the latter harvested “Cốm” are often big, thick, and suitable for cooking with other ingredients.

Since Cốm is regarded as a precious seasonal ingredient, connoisseurs recommend chewing on just a pinch at a time to truly savor the natural sweetness of the rice. Slowly enjoy Cốm to savour its subtle scents, tastes, and softness. Cốm in different parts of Vietnam tastes distinctly; however, Cốm from Vong village (Lang Vong), located on the outskirts of Hanoi, is considered to have the best taste. The rice grown in Vong village is wonderfully flavored and fragrant, that can only be grown and harvested in this village. The legend of making Cốm in the village begins with a severe starvation in the village hundred years ago. As the rice crop was not ready for harvest, residents then had nothing else to eat. One hungry farmer tried roasting the unripe grains of rice as his last resort. Just like the accidental invention of Coke in the West, Vong villagers found that by roasting the rice in a clay jar and smashing it to remove the husks, they could produce a delicious dish and found “Cốm”. As the rumors about the new dish spread widely, the King sent for the head villager of Vong to the court. The King was so delighted with this dish that thereafter, each autumn, Vong villagers were requested to present him with their Cốm. According to the villagers, they have been making Cốm for at least 700 years. The process of growing, harvesting, and processing the rice is apparently a long-guarded secret of farming families of that village. It’s been said that in the past only sons and daughters-in-laws were able to know how to make Cốm since once married a daughter may reveal the recipe to her husband and his family. 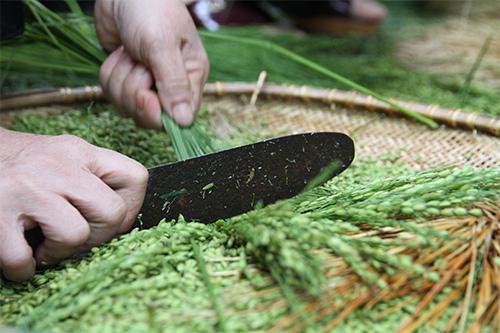 Though the secret to bring out the best taste of Cốm is still kept among families, the process consists following steps. At the beginning of the season, young glutinous rice is carefully selected since they are in their blossom. For the best Cốm, only grains of nep hoa vang, a variety of sticky rice that yields smallish round grains, is used. To check the readiness of the grains, Vong farmers pick and bite on some of the raw grains. If it tastes as sweet as milk, then it is harvest time. Grains that are too old won’t have a nice green coloring. Grains that are too young will fall apart when pounded. The grain must be manually threshed and cleaned, before being roasted with a stoneware pan over low and steady firewood. The dried grains are then pounded in a mortar and stirred frequently from bottom to top to remove all the husks. The winnowing and pounding happen exactly seven times to remove the husk. If there’s too much pounding, the rice loses its green cask and turns brown. Once done, the finished Cốm is carefully stored in layers of lotus leaves so that it may remain fresh and tender. The final result is glossy green Cốm, soft and slightly chewy, that cannot be found anywhere else. People also dry “Cốm” to extend the expiry date though the taste then is not the best.

Cốm now can be found at some Vietnamese market in the U.S and several European countries as well. For more interesting information as well as recipes for dishes made from Cốm, read the following articles of best recipes with Cốm and delicious way Vietnamese use Cốm in their desserts.

Vietnamese Noodles – Part 1: Pho, Hu tieu and Banh Canh
Vietnam has long been known as the homeland of an overwhelming number of noodles, from the world famous Pho to bowls of Hu Tieu ...

Mooncakes in Vietnam
In Vietnam, mooncakes are called “Bánh Trung Thu”, which can be translated to "Mid-Autumn cake". Traditionally in Vietnamese culture, mooncakes have been seen as ...

Easy recipes with Cốm – Vietnamese green rice flakes
In the previous blog post Cốm - Autumn’s special gifts for Hanoian, we have written about Cốm - the unique ingredients of autumn. Throughout ...

Delicious ways Vietnamese use Cốm in their desserts
In previous blog posts, we have introduced Cốm - Vietnamese green flakes, a special ingredient of the Autumn and some amazing though easy recipes. ...
Vietnamese cuisine

Vietnamese coffee recipe: The most hunted drinks in Vietnam